What is White Bread?

White bread is a favorite in pretty much all western countries. It is a sweeter variety of bread, known for its fluffy texture and pure white color. Bread manufacturers in the U.S. bleach the flour used in white bread for purer color, but Europe does not allow the extra-processing to create such color.

White bread is only produced by wheat flour. It is the least healthful type of bread when compared to sourdough, whole wheat bread, and rye variations, containing fewer nutrients and fiber due in part to the refining process used on the flour.

Like most types of bread, it is made using a leavening agent of yeast, salt, sugar, flour, and water. Ingredients such as cinnamon, garlic, and other spices are frequently added to create variation in the flavor of the bread.

White bread is typically served as the base of sandwiches, so much so that it is frequently referred to as sandwich bread in the United States.

The History of White Bread

Americans love to eat white bread. Over 135 million consumers buy white bread in the United States. While white bread may be a staple of the American diet, its origins trace back to ancient Egypt.

Contrary to what you might believe, not all flour makes white bread. Truly white bread consists solely of wheat flour, and the Egyptians were the first to record their method of sifting the grain to produce pure white starch.

In the ancient world, Egypt claimed the title of the breadbasket of the Mediterranean. Their pharaohs grew richer on the sale of their refined wheat flour grown on the shores of the Nile.

As flour mills grew across Europe and the United States, the skill of the ancient Egyptians became commonplace. By the 1920s, companies like Wonder Bread began mass-producing white sandwich bread.

Surprisingly, despite its previous connection to wealth and status, or perhaps because of it, an entire social movement rose up against white bread in America led by Bernarr Macfadden. White bread became the symbol of immortality and plastic perfectionism.

The same immoral belief permeated the counterculture of the 1960s. It became a symbol of rebellion to eat wheat bread and eschew white bread - the symbol of “The Man” on grocery store shelves.

The social stigma against white bread waned with the dawning of the 21st Century. Now, white bread holds a fond place in many hearts as the bread of choice for grilled cheese, PBJs, and toast.

White bread bears the brunt of the attack from diet gurus and the food pyramid. Refined wheat flour loses much of its nutrients and minerals, while its low fiber count means the bread can easily spike blood sugar in individuals.

That being said, a slice of white bread typically only contains about 100 calories and very little fat. Fortified bread does contain some calcium and magnesium, too. But if you’re looking for an especially healthful bread, white bread isn’t the variety for you.

How to Make White Bread

White bread recipes are typically fairly basic. As with most yeasted bread, white bread recipes begin with mixing the water, yeast, and sugar and allowing the mixture to froth. After that, you’ll mix your butter, flour, and other ingredients together until an elastic dough has formed.

Basic white bread recipes require at least two proofing stages. The first occurs after the dough has formed, and lasts for about an hour. After the first proof, shape the loaves in your bread tin or on a baking sheet. Then you’ll proof the dough again, for 40 minutes or so.

After the second proof, many recipes require you to brush the loaves with oil or butter to preserve moisture before baking. Most recipes only require an hour-long bake before you have freshly baked bread for your enjoyment.

White bread is an especially easy dough to experiment with.

Savory variations of white bread usually add herbs, meat, or cheeses to the dough. For a spin on garlic bread, add parmesan and cheddar cheese to your dough. Slather the loaf with garlic butter before baking for an extra garlicky loaf.

White bread dough also lends itself well to sweet variations. Mixing in cinnamon, raisins, and brown sugar is a favorite twist on the plain loaf. Or, you could try mixing in orange zest, cranberries, and vanilla for a citrusy breakfast treat. 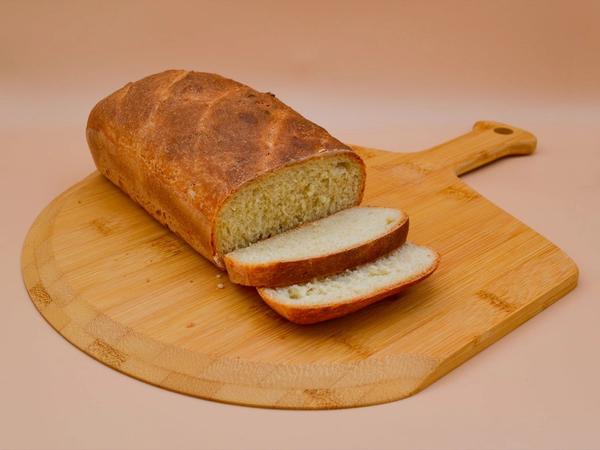 What is white bread?

White bread is a type of bread made with white flour. It is typically soft and has a mild flavor.

How is white bread made?

White bread is made by adding bleached or unbleached white flour to water or milk, kneading the dough, and then baking it. The dough may also contain salt, fat, and sugar.

Why is white bread white?

The white color of white bread comes from the type of flour used to make it. White flour is milled from wheat that has had the bran and germ removed. This process strips away much of the natural color from the wheat kernels.

Is white bread healthy or unhealthy?

White bread has been criticized for being unhealthy because it is made with white flour, which has had the bran and germ removed. This process strips away many of the natural nutrients found in wheat. White bread also typically contains added sugar and fat. However, white bread can be part of a healthy diet if it is consumed in moderation and paired with other nutritious foods.

How many calories are in white bread?

The number of calories in white bread varies depending on the recipe and ingredients used. A slice of white bread typically contains around 70-80 calories.

What are some popular brands of white bread?

Where can I buy white bread?

White bread is widely available and can be bought at most grocery stores. It can also be ordered online from many different retailers.

How should white bread be stored?

White bread should be stored in a cool, dry place. It can be kept in the fridge if you prefer, but it will become stale more quickly this way. Once white bread is sliced, it should be wrapped tightly in plastic wrap or placed in a zip-top bag to prevent it from drying out.

How long does white bread last?

White bread typically has a shelf life of 1-2 weeks. However, it can last longer if it is stored in the fridge or freezer.

Can white bread be frozen?

Yes, white bread can be frozen. slice the bread first if you plan to freeze it, as this will make it easier to thaw and use later. Wrap the white bread tightly in plastic wrap or place it in a zip-top bag before freezing. When you're ready to use it, thaw the bread at room temperature or in the microwave.

White bread is typically not vegan because it is made with milk and eggs. However, there are some vegan white bread recipes available that do not use these ingredients.

No, white bread is not gluten-free because it is made with wheat flour. There are some gluten-free white bread recipes available that use alternative flours, such as rice flour or tapioca flour.

No, white bread is not keto-friendly because it is made with white flour, which is a high-carbohydrate ingredient. There are some keto-friendly white bread recipes available that use alternative flours, such as almond flour or coconut flour.

What can I use instead of white bread?

There are many substitutes for white bread, including whole wheat bread, rye bread, and sourdough bread. You can also use alternative flours to make white bread, such as almond flour or coconut flour.

Can white bread be made into French toast?

Yes, white bread can be used to make French toast. Slice the white bread into thick slices, dip it in a mixture of beaten eggs and milk, and then cook it in a frying pan until golden brown.

Can white bread be made into grilled cheese?

Yes, white bread can be used to make grilled cheese sandwiches. Simply place some cheese between two slices of white bread and cook in a frying pan until the cheese is melted and the bread is golden brown.

Can white bread be toasted?

Yes, white bread can be toasted. Place the white bread slices on a baking sheet and bake in a preheated oven until golden brown. You can also toast white bread in a toaster.

What is the difference between white bread and wheat bread?

Can white bread be used for sandwiches?

Yes, white bread can be used for sandwiches. It is a versatile bread that can be paired with many different fillings.

What are some tips for making the perfect sandwich?

Some tips for making the perfect sandwich include: using fresh bread, adding a variety of fillings, and avoiding ingredients that will make the sandwich soggy. Bread that is a day or two old is ideal for sandwiches as it will hold up better to fillings and won't get as soggy. Adding a variety of fillings, such as meats, cheeses, vegetables, and condiments, will give your sandwich more flavor and interest. And finally, avoid adding wet or oily ingredients, such as salad dressing or olive oil, as these can make the bread soggy.

I've been baking bread for about 10 years now and ever since mastering sourdough bread in 2020 I've decided to branch out into discovering every type of bread imaginable.

This website will document all of those bread types along with recipes as and when I've made them.